Preimplantation genetic testing, also known as embryo biopsy, is used to identify chromosomal or genetic defects in embryos prior to an in vitro fertilization (IVF) cycle. Genetic defects are a primary cause of both failure of an embryo to implant and also subsequent miscarriage after successful implantation.

PGD is used to diagnose a specific, single genetic defect that is known to be carried by one or both parents. This can be because the parent has that defect, such as muscular dystrophy, or because it is present in one of their families’ histories. If PGD identifies an embryo with that genetic defect that risks a child with that disease, the embryo is not selected for implantation in the uterus, and a non-affected embryo is used instead.

PGS is often confused with PGD. The difference between the two is that PGS evaluates embryos for the proper number of chromosomes, which is called euploidy. An abnormal number of chromosomes (too many or too few) is known as aneuploidy and can result in birth defects such as Down syndrome. In evaluating for proper chromosome numbers, PGS tests for many chromosome problems in one test.

For couples with a known risk of heritable, debilitating diseases (often discovered through detailed family history evaluation by a trained geneticist), genetic testing can lower the risk of passing that disorder on to their child. Genetic testing can also help increase the chances of a healthy pregnancy by screening for potential genetic problems that might negatively affect pregnancy and birth.

Dr. William Ziegler discusses preimplantation genetic screening and how it might affect fertility decisons for couples trying to conceive.

The role of chromosomes in reproduction

Chromosomes, which contain DNA (deoxyribonucleic acid), come in pairs. A normal human cell contains 46 chromosomes, 23 pairs. Sometimes DNA contains an abnormal number (aneuploidy), or structural abnormality of chromosomes. In addition to aneuploidy, which is the most common abnormality, mutations can occur in the DNA sequence, also resulting in a genetic defect. 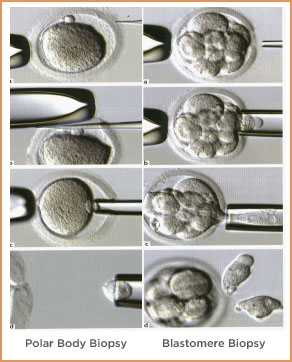 These structural abnormalities include translocations, inversions and deletions of certain chromosomes. Both types of chromosome abnormalities can be present in a woman’s egg or a man’s sperm.

The transmission of a chromosome abnormality to an embryo can result in implantation failure, miscarriage, pregnancy complications or a baby born with a genetic disorder. Such a condition can cause various disabilities, health complications and death.

Preimplantation genetic testing identifies whether an embryo is chromosomally normal prior to implantation. While not providing a 100 percent guarantee of a defect-free birth, genetic testing provides tremendous relief to parents, and dramatically decreases the chances of an affected pregnancy.

The PGD process begins by obtaining embryos developed in an IVF cycle. Once embryos have been retrieved, one or two cells are biopsied from the embryo. This procedure involves removing either a polar body, which is half of the maternal DNA, or a blastomere, which is a cell from the embryo that contains its DNA. 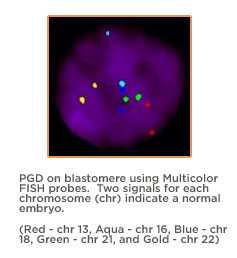 Once cells have been extracted, lab procedures are performed to test for abnormalities. The two most common techniques are fluorescent in situ hybridization (FISH) and polymerase chain reaction (PCR).

PCR is used to detect single gene (monogenetic) disorders. FISH is used to evaluate chromosome numbers and structures in order to identify the absence or presence of specific disorders in a developing embryo.

As a result, only embryos free of genetic diseases are transferred to the mother’s uterus during the next stage of the IVF cycle. This increases the chance of conception and ultimately a healthy baby.

PGD is most commonly suggested for couples that are aware that they are carriers, or potential carriers, of a certain genetic disorder. These include:

Doctors also recommend that women who are considered to be at advanced maternal age (35 and older) use PGD. This is because as a woman gets older, the chromosomes in her eggs do not always divide normally, which can increase the chance of developing embryos with abnormal chromosomes. This can lead to a number of different genetic disorders, including BRCA1 which can lead to cancer.

PGD is also helpful for couples who face unexplained infertility, recurrent pregnancy loss, repetitive IVF failures or male factor infertility. These conditions may well be caused by a genetic defect.

PGS is performed very similarly to PGD. The process starts by gathering embryos created in an IVF cycle. Once embryos are retrieved, cells are biopsied from the embryo. This procedure involves removing either a polar body or a blastomere.

Once cells have been extracted, the number of chromosomes present in each cell is evaluated. If a cell has 23 chromosomes from each parent (46 total) it is normal.

In evaluating for proper chromosome numbers, PGS tests for many chromosome problems in one test. Common conditions caused by chromosome abnormalities include Down syndrome, Turner Syndrome and Klinefelter syndrome.

Individuals and couples should consider PGS if they carry chromosomal abnormalities that may cause genetic conditions, which is generally determined through detailed family history evaluation by a trained geneticist. As a result, only embryos free of genetic diseases are transferred to the mother’s uterus during the next stage of the IVF cycle. This increases the chance of conception and ultimately of a healthy baby.

Much like PGD, PGS is also recommended for women ages 35 and older because women of advanced maternal age may produce eggs with aneuploidy, which is an abnormal number of chromosomes.

Preimplantation genetic testing is relatively risk-free. But with any form of technology, it is important to be cautious. In some cases embryos can be diagnosed incorrectly.

However, the chance of transferring a genetically defective embryo that was mistakenly identified as normal is only between 2 and 11 percent, depending on the specific disorder. In rare cases the genetic testing biopsy process can damage embryos.

There are no reports of identifiable problems in babies born from IVF with PGD. But it is important to consider the possibility of abnormalities occurring later in life as a result of unknown damages that occurred during the genetic testing process.