In vitro fertilization (IVF) is utilized in more difficult infertility cases involving severe endometriosis, pelvic adhesions, or problems that cannot be corrected with other treatments.

It is also the best treatment if both fallopian tubes are blocked. The IVF process is complex and consists of several steps, including: ovulation induction, egg retrieval, fertilization of the eggs and embryo culture, embryo grading, and embryo transfer.

Learn more about how Reciprocal IVF can help lesbian couples to share in the IVF process.

Interested in learning more about how RSCNJ can help you through your fertility journey? Contact us for more information or schedule an appointment.
Schedule an Appointment Contact Us Online

Hormone injections are given to stimulate multiple egg production. This stimulation process usually requires the initial use of Lupron to suppress the ovary to prevent ovulation or the use of Antagon or Cetrotide during the stimulation cycle until the desired time. Daily gonadotropin injections are then added to stimulate the development of the eggs. These are usually given subcutaneously (under the skin) and are much less uncomfortable than the previous generations of medication. We then monitor the progress of ovulation induction with ultrasounds and blood estrogen levels over several days.

An egg retrieval is performed by placing a special needle into the ovarian follicle and removing the fluid that contains the egg. This is a relatively minor procedure and is performed by visualizing the follicles with a vaginal ultrasound probe. A needle is directed alongside the probe, through the vaginal wall, and into the ovary. To avoid any discomfort, strong, short acting intravenous sedation is provided.

Fertilization of the eggs and Embryo Culture

Once the follicular fluid is removed from the follicle, the eggs are identified by the embryologist and placed into an incubator. The eggs are fertilized with sperm later that day by conventional insemination or by Intracytoplasmic Sperm Injection (ICSI).

During conventional insemination approximately 50,000 sperm are placed with each egg in a culture dish and left together overnight to undergo the fertilization process. The ICSI technique is used to fertilize mature eggs in the event of sperm or egg abnormalities. Under the microscope, the embryologist picks up a single sperm and injects it directly into the cytoplasm of the egg using a small glass needle.

ICSI allows couples with very low sperm counts or poor quality sperm to achieve fertilization and pregnancy rates equal to traditional IVF. It is also recommended for couples who have not achieved fertilization in prior IVF attempts or if a low number of eggs are retrieved (< 5).

The eggs will be checked the following day to document fertilization and again the next day to evaluate for early cell division. After fertilization they are called embryos and are placed in a solution called media to promote growth. Embryos are routinely cultured for three days and then transferred to the uterus and/or cryopreserved (frozen). We now have the ability to grow the embryos for five days until they reach the blastocyst stage. Transferring blastocyst embryos offers a lower risk of multiple birth while providing a high chance of pregnancy.

On day two or three after fertilization, the embryos will be evaluated for blastocyst culture. If there is a sufficient number of dividing embryos they will be placed in special blastocyst media and grown for two or three additional days.

Embryos may be transferred on day 2, 3, or 5 after egg retrieval. Transfer performed on day 5 is called a blastocyst transfer. They are placed through the cervix into the uterine cavity using a small, soft catheter. This procedure usually requires no anesthesia.

A blastocyst is an embryo that has developed for at least five days after fertilization — the point at which, during natural conception, embryos arrive in the uterus. 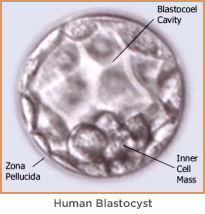 Prior to developments in IVF over the last decade, embryos were routinely transferred back to the uterus just three days after fertilization in the embryology lab.

But in a natural conception, the embryos arrive in the uterus approximately two to three days later. It was not until recent years that advancements in laboratory techniques allowed embryologists to mature the embryos further.

By delaying the blastocyst transfer a few extra days, fertility specialists are much better able to select the embryos which have the best chance for survival.

In turn, by growing embryos to a more advanced stage, fertility physicians are able to transfer fewer embryos without decreasing the chance for pregnancy. This advancement maintains a high pregnancy rate while decreasing the risk of conceiving a high-order multiple pregnancy – helping avoid serious risks to both the mother and baby.

After the embryo transfer

Progesterone is routinely given to support the uterine lining and could be given by an injection or vaginal application. This is continued until 10 – 12 weeks of pregnancy. At that time the placenta should be competent to make its own progesterone to maintain the pregnancy. In those patients who did not have an optimal response or if the embryology is poor we give estrogen in a pill form to enhance implantation. A blood test is performed 12 days after the embryo transfer to confirm a pregnancy.

The grading of embryos has two purposes; first is to determine the number of embryos that should be transferred to avoid a multiple pregnancy and second to decide if the remaining embryos are of good enough quality for cryopreservation. The quality of an embryo is determined by assessing 3 major components; cell number, cell regularity (regularity of size), and degree of fragmentation.

The determination of “quality” is not made until about 48 hours after the egg retrieval. By 48 hours good quality embryos should be at least 4 cells. If they are not at least 2 cells by then they are considered “arrested” and should not be transferred. By 72 hours, 3 days after retrieval, we prefer that some of the embryos are at least 6 – 7 cells. 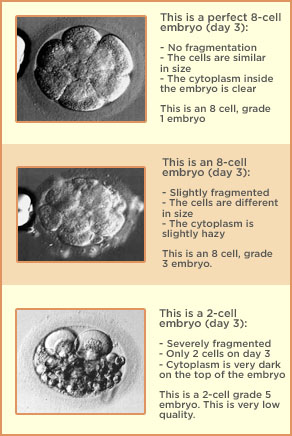 Embryos with higher cell numbers and regular appearing cells, called blastomeres, and little or no fragmentation have a higher overall chance of implanting than do embryos with less cells, more irregularity and more fragmentation. Embryo quality gives us information to predict the chances of pregnancy from an embryo transfer. Because the implantation process is a complex one there are many other contributing factors we can not measure. We have seen the two extremes from a failed cycle with the transfer of 3 perfect looking embryos to a successful pregnancy with transferring one low grade embryo.

The grades of the embryos have no relationship to birth defects, intelligence, strength, or athletic ability. The only difference as far as we know is in the chance that the transfer of the embryo(s) will result in a pregnancy and a live birth.

Our physician’s IVF success rates have consistently been above the national average and one of the highest in the state. For more information, click below to view the informational IVF packet.

Assisted reproductive technologies (ARTs) are used when an infertile couple cannot be treated using simpler methods or when all other methods have failed. These procedures have excellent success rates but require a significant amount of time, effort, and, in some cases, money.

Our team helps to minimize these added pressures by explaining each process fully and answering all of your questions so that you understand exactly what is required of you for these types of therapies to be successful.

Over the past decade, our knowledge and technological advances have increased the number of procedures designed to assist infertile couples in achieving pregnancy.

The original and most often used infertility therapy is in vitro fertilization (IVF), which, along with other techniques, has substantially increased the likelihood of couples having babies.

The Reproductive Science Center of New Jersey offers all of the assisted reproductive technologies available worldwide.